Fernand Petiot claimed to have invented Bloody Mary’s in 1921, while working at the New York Bar in Paris, which later became , a frequent Paris hangout for Ernest Hemingway. They are fabulous made with vodka or gin, although my favorite is the gin. Gin adds a little more depth of flavor. People add a myriad of garnished to bloody mary’s. You can put anything in them from pickled asparagus to sushi. In this recipe, I use a slider with an olive and a carrot.

Print Recipe
Bloody Mary's, The Best Ever
This delicious cocktail is perfect for any brunch. 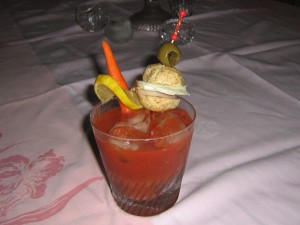 I have found that the type of tomato juice used in this recipe is the key to a really thick and delicious Bloody Mary. Don't use V-8 juice or Clamato juice as it changes the consistency and makes it too watery. The name "Bloody Mary" is associated with a number of historical figures — particularly Queen Mary I of England, who was nicknamed as such in Foxe's Book of Martyrs for attempting to re-establish the Catholic Church in Britain — and fictional women from folklore. Some cocktail aficionados believe the inspiration for the name was Hollywood star Mary Pickford. Others trace the name to a waitress named Mary who worked at a Chicago bar called the Bucket of Blood. However, another argument for the origin of “Bloody Mary”, that the name in English simply arose from “a failure to pronounce the Slav syllables of a drink called Vladimir” gains some credibility from the observation that the customer at Harry’s Bar in Paris for whom Fernand Petiot prepared the drink in 1920 was Vladimir Smirnov, of the Smirnoff vodka family. © Galley Chef All Rights Reserved